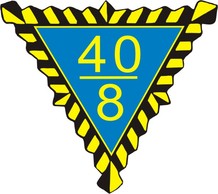 The Forty and Eight is committed to the charitable and  patriotic aims. Our purpose is to uphold and defend the United States Constitution, to promote the well  being of veterans and their widows and orphans, and to actively participate in selected charitable
endeavors, which include programs that promote child welfare and nurse's training.

The titles and symbols of the Forty and Eight reflect its  First World War origins. Americans were transported to the battle front on
French trains within box  cars stenciled with a "40/8", denoting its capacity to hold either forty men or eight horses.

This  uncomfortable mode of transportation was familiar to all who fought in the trenches ; a small misery  among  American soldiers who thereafter found "40/8" a light hearted symbol of the deeper service,  sacrifice and unspoken horrors of war that bind all who ha borne the battle.